Over the Father’s Day weekend, my kids and I had some fun with the 2011 Lincoln MKT AWD crossover. In the past, with other autos like the Ford Flex and the Lincoln MKX, I approached my articles about these vehicles with more of a “reviewer’s perspective.” This time, I just thought that I would let me kids “drive”…well, not the car itself, but the review. An important thing about any type of product is making sure that it appeals to many audiences. When I approach product reviews on HighTechDad.com, I look at the product from the perspective of integrating it into a family environment. This can be from products as small as a gadget, but can go even as far as something much larger and more costly like a $58,000 automobile like the Lincoln MKT.

So, over Father’s Day weekend, I drove my 2 younger daughters around to various place, after instructing them that THEY would be the ones choosing the best features to talk about in their mind. There are plenty of great features built into this auto, but I will leave it up to the “professional” car reviewers. I wanted my 7 and 9 year olds to give me what they thought were the “cool” things of the car. When you buy a car, how often do you ask your children what they think about it. Sometimes you can get some interesting perspectives as to why they do or do not like it, and they may bring up things that you never thought about, a completely different perspective.

The Lincoln MKT that we tested had all sorts of nifty features but the ones that my kids liked the best were:

The best way to show off these features is actually through a video that my daughters and I did: 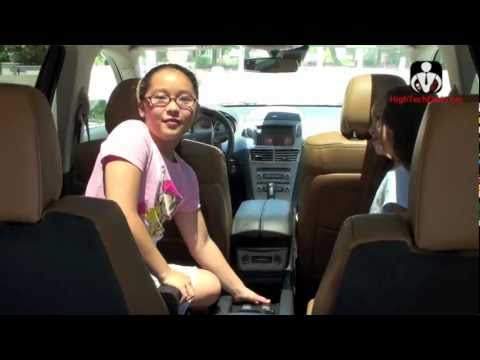 The front grill is powerful and, as my children pointed out, looks like a face with a smile.

We also did like the headlights that would turn in the direction that you are turning.

This feature was definitely one of the family favorites in both the Lincoln MKT (and the MKX).

My kids were just dying to put their heads out of the Dual Vista Panorama sunroom!

The front sunroof would go back all of the way; think of this sunroof as almost dual size, almost making your car feel like it were a convertible.

The sunroof over the 2nd row seat didn’t open but still provided a nice open feeling to the MKT. When the front sunroof was open, it would cover (and darken) the rear sunroof a bit but would not obstruct the view.

Both sunroofs can be covered with an automatic retractable set of shades should the sun get too bright.

Having 3 rows of seats is great for a big family, but when they have multiple useful configurations, it’s even better.

My kids, who spent lots of time riding in the 3rd row of the MKT because, to them, it felt like it was like riding in a limousine, quickly discovered that the rear seating row was pretty darn fun.

With a push of the button, you can individually put the 3rd row seats in either normal, stow, fold or tailgate position.

You can do the Right Hand side or Left Hand side or both seats at once using the controls that my kids quickly figured out how to use.

The seat position that my kids absolutely LOVED was that of the tail gunner…I mean tailgate position. If you are at a tailgate, the seats quickly provide comfort for two people and the hatch acts as a shade.

My kids were so happy to test this seating position out!

Ever wanted a cool and refreshing drink when you are on a long drive? Having a car with a refrigerator built in really helps!

Another “cool” feature that the model that we tested was literally “cool.” In the 2nd row console, there was a built in freezer/refrigerator. I must say, this is a great feature to have.

In the console, there is a setting for cool and freeze. We left it in the cool setting and then loaded up the refrigerator with drinks. We had about 4-5 cans of soda and some other drinks. The cooler was active only when the car was on so as not to drain the battery. The cooler area itself was insulated so when the car was off, the drinks did remain cold.

More photos of the Lincoln MKT can also be found on this Flickr photoset.

“Cool” was the word that my kids and I used a lot when playing around with the Lincoln MKT. You can see it in the video and I definitely thought that it was one of the more fun automobiles to drive. It was peppy, with the 3.5 liter Econoboost engine. My children quickly learned the meaning of “G-force” as we accelerated down the road. The heated and cooled seats provided great comfort for the adults in the front row, but also my kids in the 2nd row (as they pushed the buttons to cool down their butts and back).

I did have a bit of trouble connecting my Bluetooth iPhone to stream music via the SYNC system. For some reason, it just wouldn’t work. However, connecting my iPhone to the phone-side of SYNC was no problem. The on-board GPS worked pretty well once you figured out the interface. I have stated before that I think that the GPS UI needs to be reworked from a usability standpoint as it is not very intuitive. But I got from point A to point B without issue, once I did figure it out.

I was pretty excited being able to test out the Assisted Parking function. The premise is pretty simple, when you are driving down a street looking for parallel parking spots, you push a button. Then the MKT “looks” for a spot that it can fit into. When it finds one, if notifies you via an audible tone and on the dashboard, you are prompted to stop the car and put it in reverse. DO NOTE: you need to keep your foot on the brake since the car does not actually slow the car down when you are parking. But, it does steer the car automatically (and perfectly) into a parallel spot. Be sure to look at the video above to see it in action!

The bottom line is, the Lincoln MKT is a luxurious crossover that is a pleasure to drive and has enough “cool” features to not only get good praise from me, but also from my kids who were the primary “reviewers” of this auto.

Disclosure Text: Apart from the 10-day loan of the Lincoln MKT, I have not received any compensation for writing this content and I have no material connection to the brands, topics and/or products that are mentioned herein. More information can be found in my About page as well as here.

HTD says: See? Kids provide a lot of interesting feedback when you are looking at various products. Be sure to listen to them!

macOS Monterey Slow Upload Speeds? It Might Not Be your Imagination! [update #2]

macOS Monterey Slow Upload Speeds? It Might Not Be your Imagination! [update #2]