Taking the Family High Road in the 2014 Toyota Highlander

When my kids were toddlers, the minivan was the vehicle of choice with it essentially being a house on wheels. We even removed one of the seats and put a fake polar bear rug on the ground to make diaper changes a bit more cozy. Fast forward almost a decade and our mini van is long gone, replaced with an economical 4-door and a crossover. But when I got behind the wheel of the 2014 Toyota Highlander Limited Platinum SUV  I started having some visions of road trips, camping, or heading to the snow. The Highlander seemed to be a way to potentially enable those activities.

SPONSORED: This review has been sponsored by AutoNation Toyota Hayward and AutoNation, America’s Largest Auto Retailer. Buying a new car? There are over 20,000 AutoNation Associates at 250 new vehicle franchises across 15 states. Looking for a used auto? Get CARFAX history report, 135-point safety inspection, 3-day/150 mile money-back guarantee and more.

Graduating from a mini van to an SUV seems like a logical step in family evolution. There is a convenience with mini vans but they just aren’t that “fun” – well, they can be depending on how they are outfitted. But as kids become more active, the ideal scenario is that the family vehicle becomes active in the process as well. An SUV helps to make that active transition, I believe.

If you have about 13 minutes to spare, you should take a look at my video review of the 2014 Toyota Highlander below (also available directly on YouTube). Or read on for a recap of the highlights. 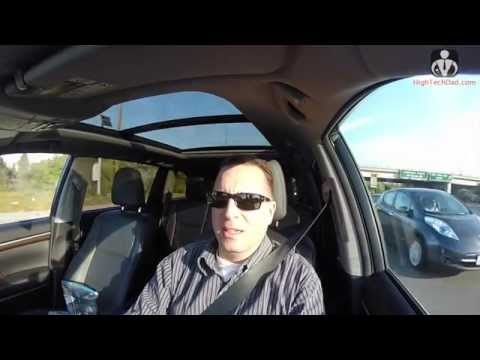 Otherwise, here are some of the features that stood out (as well as a couple that aren’t in the video above.

There is nothing worse than having to fumble around for a key to open the door or the hatchback. When you have the key in your pocket or your purse, you simply need to grab the handle to unlock the door. Or if you are locking things up, just push down on a series of ridges on the door handle to lock. Another nice feature is that when you get in proximity of the car at night, some of the ambient lighting comes on.

If you have a family of 4, the Highlander is perfect. With 2 captains chairs in the middle (isolating potentially bickering kids), the cabin is extremely comfortable. But, there is another row in the rear of bench seating that can get a couple of smaller adults or some kids.

But if you don’t need the seating, the seats just fold down and suddenly you have a ton of extra storage.

One of the nice things is the automatic liftgate that can be triggered using the keyless keyfob or by pushing a button on the liftgate itself. You can also adjust how high the liftgate goes. I have always liked liftgates particularly during the rainy season as the hatch acts as an umbrella. You can also open the rear window on its own which allows you to stuff extra cargo leaning against the gate itself. This is particularly useful for loading up for road trips.

Also, there is a smaller storage area in the rear for flatter objects you want out of sight (like a laptop).

The middle row has window shades that can be manually pulled up to block out the sun or provide extra privacy.

My kids particularly liked having the ability to control the rear climate which included heated and cooled seats. (And there is a standard 120V plug for various gadgets underneath the rear climate controls.

It’s always nice to have a place to stash your sunglasses but imagine my surprise when I popped down that sunglass holder to see a curved mirror. Called the conversation mirror, it makes it quite a bit easier to talk with people in the rear seats as well as to see if your kids are getting carsick using their various devices.

While the cabin itself is quite roomy, when you roll back the panoramic moon and sunroof cover, the cabin feels absolutely spacious. The front part tilts up as well as slides open, giving a great view of the sky. And the automatic moonroof shade provide cover should you want to close it.

The engine is responsive but don’t expect to go racing around curvy mountain roads as the SUV feels heavy. But this is to be expected. However, the vehicle I tested was an all-wheel drive which made me feel just a little bit better driving on slick, rainy roads.

The front seat passengers enjoy dual climate controls which means there is no arguing about how hot or cold to have the temperature in the front part of the cabin. You can also synchronize the heating/cooling if desired. Additionally, you can control the rear seat climate controls directly from the front.

When it comes to cars, I love lots of buttons whether they are physical or touch-screen. The Toyota Highlander had many different types of buttons within the driver’s reach. And these buttons frequently signify additional features. The Toyota Highlander that I drove had Dimming High Beams, Blind Spot Monitoring, Lane Departure Warning, Parking Assist, and Heated Steering, just to name a few.

I liked the auto-high beam headlight feature. Basically, you can turn on your high beams on dark roads and the Toyota Highlander will automatically lower to normal headlight beams when it detects oncoming traffic as well as when you low down below a certain speed.

Also nice to have are two safety features: blind spot monitoring and lane departure warning. I believe that blind spot monitoring should be a standard feature, particularly in larger vehicles where there are more blind spots. It was quite helpful to know if there were vehicles in the lane that I wanted to go into and having an orange light flash at me made it safer for turning. The lane departure warning simply tells you if you are drifting out of your lane – a nice feature to have on those longer road trips.

The Toyota Highlander was complete with other luxury conveniences like heated and cooled front seats. This “warms” the hearts of the front passenger and driver.

There are also some driving buttons (some of which I tested and others not) that change how the Toyota Highlander drives. You can turn off Traction Control (not sure why would would want to do this) and there are settings for when you drive in the snow, when you are descending a hill, and another (which I didn’t test) but I believe changes the differential. Above those are the AUX and USB connectors as well as the traditional automotive power plug.

The steering wheel has many controls. You typically find the audio and phone controls there but the Toyota Highlander also has control buttons for the driver’s instrument cluster which has a huge number of controls, displays and readouts. You can get real-time gas mileage, distance to empty, what direction you are traveling, how eco-friendly you are driving, what is playing on the media center, and much more.

This is a great feature for those people who load up the Toyota Highlander with passengers, all the way back to the rear row. When you enable the Driver Easy Speak feature, you essentially use the built-in microphone (which is used by the phone feature) to broadcast the front row voices all the way to the back through the speakers. So there is less of a need to shout so that the people in the way back hear you. It sounded a bit like Darth Vader which provided a few minutes of kid/dad fun.

Unfortunately I don’t have a photo of this, and I quite discovered this feature by accident. Once you pair your smartphone via Bluetooth and allow the Toyota Highlander to get messages from it, you get notified on the entertainment center screen that you have a new incoming message. The Toyota Highlander can then read your text messages to you. This is a great safety feature to have as it prevents distracted driving.

This is something that I have never seen in a car but the designers at Toyota deserve recognition for this. There is a shelf that extends to the front passenger that allows you to put all of your devices or other objects. Close to the driver is a plastic plug that can be removed to allow access for a charging or USB cable to go down below to connect to the vehicle’s USB port.

And a Bunch of Other Stuff

I didn’t cover everything that this 2014 Toyota Highlander Limited Platinum had. Here are a few more things (some of which are covered in the video above):

Overall, my family and I really enjoyed our extended test drive of the 2014 Toyota Highlander Limited Platinum. There were lots of “techie” features that made me happy, it was quite easy to drive and everyone felt it was quite comfortable as well. The MSRP is $43,590 which included the Platinum Package (Technology package, panoramic moon roof, heated steering and seats, radar cruise control, lane departure warning and the captain’s chairs which keep your kids separated – haha). The price as tested was $44,450. If you have a chance, give the Toyota Highlander a close look if you are looking for a full-featured SUV for your family.

Disclosure Text: Apart from the loan of the vehicle (which also included a tank of gas and insurance), I have no material connection to the manufacturer. As noted, this is a sponsored review but all opinions within this article, unless otherwise noted, are my own and are not subject to the editorial review from any 3rd party. More information can be found in my About page.

HTD says: The 2014 Toyota Highlander is a perfect SUV for families looking to hit the road in comfort, style and quite a bit of tech.

Review of the Canvia Smart Digital Canvas and Frame which digitally and elegantly displays works of art from around the world, including modern & classic.

Review of the Nooie Cam Pro – a wireless security camera that provides 2k resolution and has day & night modes to keep an eye on your home.