Print a Circuit Board using Just your Printer and Printem

Printem, a new technology coming from the University of Toronto, enables inventors, hobbyists and students to print circuit boards using just a printer.

3D printing has moved from dream to reality in just a few years. Personally, I’m waiting for the day when I can speak “coffee, hot” into a device and have it magically appear like on Star Trek. Home and business users can now print complex, three-dimensional objects fairly inexpensively. This allows for rapid prototyping and inventing to take place – I predict a whole new generation of inventors coming right around the corner. But, if you want to add any type of intelligence to those 3D printed objects, you pretty much have to rely on hobby electronics boards like the Arduino, Raspberry Pi or BeagleBone. And forget about integrating other components or architectures if you aren’t good at wiring or soldering. But some recently announced work coming from the University of Toronto is aiming to change that. Meet Printem – a process to print circuit boards (PCBs) using just a special type of paper and your home or business printer.

PCBs in pretty much every piece of electronics you have. Conceptually, they are pretty simple. They are boards that have little electric conduits or roadways which connect various electronic components together. (There is a pretty good overview of Printed Circuit Boards over at sparkfun.com.) PCBs can consisted of physical wires connecting components or conductive solder. It is possible to build PCBs yourself but it can be time-consuming.

This is one of the many reasons why Varun Perumal Chadalavada, a computer science PhD student, and Daniel Wigdor, assistant computer science professor, both at the University of Toronto founded Printem. They have been working on the project since 2014. Likening the process to printing a Polaroid picture, Chadalavada explains how Printem’s process is very similar.

Essentially, you design your circuit board on your computer and then you print it onto a specialized Printem film. Then you expose the film to UV or sunlight for about 30 seconds and the circuit design is basically etched into the film.

The resulting PCB is fully formed and functional, meaning it is conductive and ready to have other components and devices attached to it.

This video explains what Printem does. 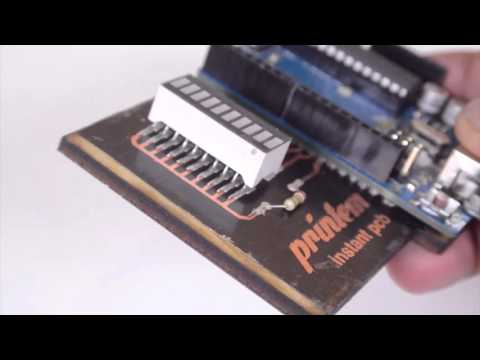 The Printem team recently was recognized as one of four University of Toronto’s Inventions of the Year.

While I haven’t tried this new technology and process personally, I do believe it is the next evolution in rapid prototyping and a perfect solution for hobbyists, students, schools, inventors and people who just like tinkering around.

Via an email interview with co-founder, Varun Perumal Chadalavada, I was able to get a few more details about this new Printed Circuit Board technology.

HighTechDad: How long was this project under development?
Chadalavada: It took about 12-14 months to get a working prototype for Printem.

HTD: What is the cost to print one board (estimated)?
Chadalavada: Several factors influence the production cost of Printem films. The choice of substrate (for example one could choose a high performing material for use in harsh environmental conditions).

HTD: How does the cost compare with more traditional methods?
Chadalavada: Printem is much cheaper for prototyping of circuit boards in small quantities than current methods, but the traditional methods such as chemical etching are still more cost-effective in volumes.

HTD: What is the target market for this new technology?
Chadalavada: Printem can serve a broad range of markets including prototyping use by individuals, educational uses to medium scale of flexible circuit boards for industrial and commercial use.

HTD: What are the next steps? Will it be mass-produced?
Chadalavada: We are currently talking to several manufacturing facilities to set up the mass production of Printem films, hoping to get something up in the next 8-12 months but we cannot confirm anything yet.

HTD: Is there a next generation in the works?
Chadalavada: We are always working on new innovations and improvements, not only with Printem but with other allied projects. Printem is a fabrication method that is not limited to just circuit boards, you can imagine that if the copper is replaced with other materials we can manufacture entirely different objects, if we use carbon film instead of copper we can make bend sensors, electroluminescent inks will let us make custom glowing displays and so much more.

HTD: Is an inkjet or laser printer required?
Chadalavada: It will work with both of them, all you need is to lay black ink to block light, you can also use a sharpie to draw circuits and it will work.

HTD: The video shows very small patches, are there larger form factors of the printing paper?
Chadalavada: Because all the samples were made by hand at our lab it is harder to make larger surface areas with a consistent deposition of material. Hence we stuck to making smaller samples that were easier to work with. However, when the technology is scaled for mass production, the only limit on the size of the samples is the size of the materials the production machinery is capable of handling, we can easily imagine making rolls of this material that is 1 meter wide or lager if necessary.

HTD: Is this mainly for hobbyists?
Chadalavada: The speed and ease of use of Printem make it ideal for prototyping both by hobbyists and by experienced engineers. But the use is not limited to them, anywhere ad hoc quick production of circuits is necessary Printem can be used. The technology can be further extended for use in industrial and commercial applications.

As 3D printing becomes more commonplace and even less expensive, the ability to easily create end-to-end solutions with hard plastic combined with integrated printed circuit boards will not only increase time to market for many of those Kickstarter or Indegogo campaigns, I’m sure we will start seeing some pretty amazing inventions.

HTD says: Printem might be an incredible paradigm shift for inventors, educators and hobbyists, especially if they are able to keep costs low for PCBs printed at home or in the office without the need for specialized equipment.

Sneak peek at the new Biigloo AeroQuilt – made with a space-aged Aerogel and DuPont SORONA bio-fleece to keep you warm down to -40 degrees Fahrenheit.

Review of the Canvia Smart Digital Canvas and Frame which digitally and elegantly displays works of art from around the world, including modern & classic.